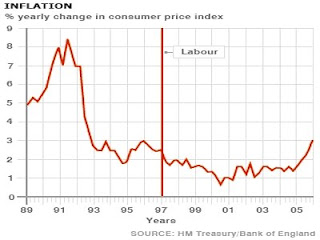 The UK inflation rate has been rising over the past year, though is still historically low. I think that the Government is only partly responsible for the economic problems we are experiencing at the moment - though the could have put aside some reserves had they been a little more prudent in recent years.

Anyway, this blog entry is about inflation and, more importantly, how it is presented. I think it's important to keep up with developments in the economy, but all statistics should be considered as a rough guide and not set in stone.
The BBC has a clever calculator that works out your personal inflation figure based on RPI. Compared to overall national inflation rate of 4.8% per year, my personal rate is 6.4%. I am not surprised that my personal RPI figure is higher than the national figure - mainly due to the increase in fuel costs over the past year, buying hardcore porn, food etc.
The main index used by the Government is the Consumer Prices Index (CPI) which a good index for comparing economies across Europe. It uses different stats compared to RPI but the experts are split over whether it is a fair index and a true measure of the increase in prices experienced by individuals and families. The fact is, there can never really be a fair index as it will always be an average across the economy - there is no answer to that. The pensioner doesn't download music or eat out as often as a young person, who in turn will not spend much on other items.
Have a go at the BBC inflation calc as it's a useful tool to see where perhaps you can make changes to expenditure and it also highlights that the national headline rate is pretty useless. Some people will see their personal inflation nearing 10%, so don't be fooled by the Politians when they say that inflation is under control!