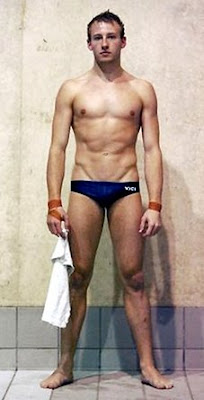 I don't want to get into too many gay themes on this blog, as I think other people deal with them really well. But one person I would like mention is Matthew Mitcham who recently competed at the Olympics in China.

The Australian 20 year old took part in the 10 metre platform diving and finished FIRST - he happens to be gay. Amazingly, of the 11,028 competitors at the games, only 11 are openly gay. Of those 11, only Matthew is male (no butch Lesbian jokes please).
Do the sums, if 1 in 10 are said to be gay, then a thousand athletes were in the closet at the games. A big topic for another day is gay footballers and the homophobic views in football. But the sums don't work there either - of the 500 or so professionals in the premier league , there are no out gay guys - take a ultra conservative 1 in 20 and you should see 25 gay players. They are there, so I hope to see them able to be come out one day soon.
There are two reasons to mention Matthew specifically - firstly, to celebrate his bravery at coming out. It takes guts to do it, but even more so when you are in the public eye as he already was. The second (and more important) reason, is that it gives me the opportunity to post a picture of an almost naked fit guy on the blog and no-one can accuse me of anything!
Matthew is like many gay men in that, being gay could be said to be the least interesting thing about him. He's an Athlete first and foremost. It's such a shame that despite all the advances, there are still plenty of "famous" people who have to live a lie, let alone the "average" man or woman. There are plenty of bigots around, but coming out stamps on those prejudices.
I have been toying with the idea of collecting coming-out and not-coming-out stories together to hopefully inspire people. Watch this, or another, space.

Well done to Matthew for just doing the deed and then getting on with the more important things in life.