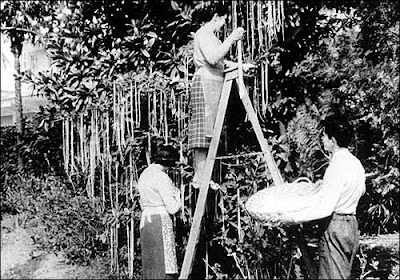 A side posting in honour of todays date...

In the 1950's, Britain was not the cosmopolitan country it is today and in 1957 the BBC decided to use the nations naivety to play an April Fools day prank. It has since become revered as a true classic British TV moment.

The serious current affairs TV programme Panorama had a 3 minute story on a bumper spaghetti harvest in Switzerland, resulting from the mild winter and "virtual disappearance of the spaghetti weevil." The report showing spaghetti growing on trees was given additional creditability by using respected broadcaster Richard Dimbleby for the voice over. Pasta was not an everyday food in 1950s Britain, and was considered by many to be a delicacy!

Panorama cameraman Charles de Jaeger dreamed up the report after remembering how teachers at his school in Austria used to tease his classmates for being so stupid that they would believe it if they were told spaghetti grew on trees.

An estimated 8 million people watched the programme on April 1st, and hundreds phoned in the following day to question the authenticity of the story, or ask for more information about spaghetti cultivation and how they could grow their own spaghetti trees. The BBC reportedly told them to "place a sprig of spaghetti in a tin of tomato sauce and hope for the best"!

Happy April fools day. If you were "got" today, I hope it was a good one.