Pete and I have been on a bargain holiday – a 12 night £3000 cruise for £700! And it was fantastic and made a change to the usual sunshine holiday. Now I know what you are thinking, aren't cruises for old people... well the cruise up to the Arctic circle (66° north) was packed with wealthy oldies and we were some of the youngest but it really didn't matter. It appears that age is no barrier to having a good time and we met some lovely people including the couple from Barnsley who we shared our dinner table with.

Here are some highlights:

Food: So much food – 40 tonnes in fact for the 900 passengers and 350 crew! (The head chef told us). The meals were amazing, in between the cakes and more food.
Sunsets: Seeing the sun trying to set at gone midnight and then not bothering is a great thing to see. We had 4 or 5 nights where it didn't get dark.
Fitness room: To make up for some of the food, I went to the gym about 7 times and the sauna too.
The crew: All so friendly and willing to make every day an event. We even had a camp Filipino waiter called Thomas who wanted us to introduce him to a nice guy in London.

All in all, it appears that the calm seas and sunny weather was pure luck, especially around the north of Iceland. And we also got a bit lucky picking a cruise line that didn't rip you off and had great evening entertainment.

There is so much to tell you about each place, but I would bore you. Let me end by saying that the Icelandic guys with blond floppy hair are a very pleasant sight and that the phrase “All's well” ended the Captains announcements in his thick Norwegian accent. 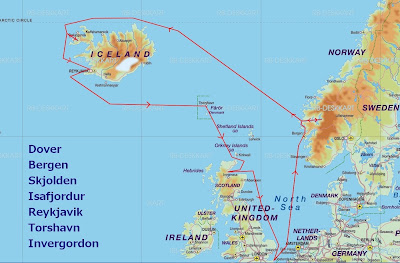