40th: Day Three - Sausalito and beyond

Another early start, but this time I'd enjoyed an 8 hour sleep, so all was well. Starting with a breakfast that consisted on coffee and mini doughnuts, we then rented bikes today from the wonderfully named Blazing Saddles, which has hundreds and hundreds of bikes and accessories.

We started at 8am by cycling along the bay and to the shore at the base of the Golden Gate Bridge. The morning was blue skies and a sun that I knew would get hotter as the day progressed. There were around a dozen mad mad surfers using the waves that broke under the bridge and over the rocks. It looked very dangerous to me. 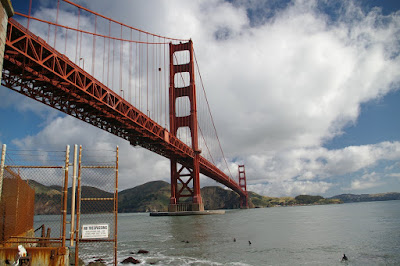 We then crossed the bridge and it is only at this point that you realise that it is very very high. When I saw the men painting up even higher, my legs went a bit. I'm sure that on a windy day, the crossing by bike is none too pleasant. It was a little shocking to see the Samaritan call boxes actually on the bridge.

We got to Sausalito at Ice Cream time (you decide when that may be) and you can just smell the money. It's a beautiful place puts our coastal "posh" towns to shame - Whitstable is a rubbish tip in comparison. We had the choice at that point to get a ferry back to San Francisco, but decided to cycle on. A tough hilly journey right round the cove to Tiberon which is just as wealthy and has a mix of new houses and expensive looking apartment blocks and old (for America) wooden houses. Despite it being a small town with a tiny theatre/cinema, it does boast an international film festival. Lunch was purchased at the local Deli. 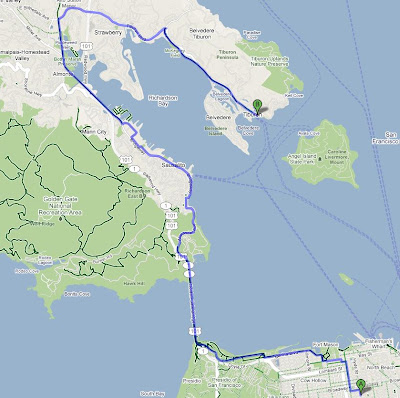 Despite the journey only being around 18 miles, due to the many hills, it took about 4 hours to get from the bike warehouse to Tiberon, plus the time we spent in Sausalito and stopping en route to take many pictures.

We got the ferry back via Eagle Island and then relaxed for a couple of hours before heading off to the baseball.
We watched the San Francisco Giants at the huge AT&T stadium. I really enjoyed it... Pete did not. There was a really great atmosphere despite the stadium being nowhere near full. Our sports could learn a few things from the way events like this are managed. For the record, the Giants won. 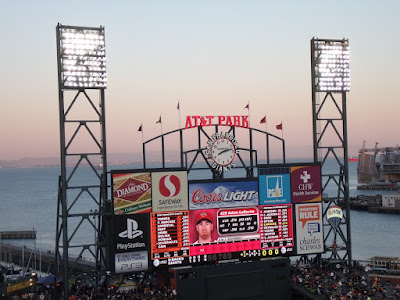