Here in the UK, there has been a TV series on Saturday evenings called Demons - it's a supernatural "drama" set in London . I don't usually watch ITV (as it is dumb down TV I'm afraid), but watched this for 2 reasons: Firstly, it looked like simple easy-to-watch TV and secondly, the lead role was played by the rather sexy Christian Cooke. It's not the highest quality programme, but fun enough with some scary and humourous scenes - there is an interview with Christian about it here. 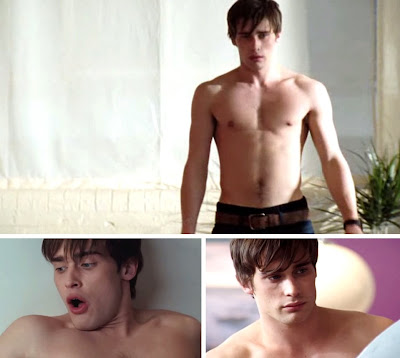 As I know some of the filming locations well, the thing that annoyed me was that there was a lack of continuity sometimes: he will walk down one street, turn the corner and then jump a mile down the road. OK, I know it's just artistic licence! I also know that Christian's screen mother would need to be a millionaire to live where they do - but never mind.

In the first episode, Pete and I enjoyed the many many shirtless scenes - but in subsequent episodes, the flesh content was almost non existent! So I wrote a complaint email to ITV:

I would like to complain in the strongest terms about Demons
as seen on Saturday night on ITV1. After the first episode,
there were NO shirtless scenes of Christian Cooke and I feel
that this was a major oversight by ITV. Please ensure that
the storyline allows for more topless scenes featuring
Christian in future.

I didn't get a reply!