Views from a train

I am currently sitting on a train from London to Edinburgh. Over the next couple of days I have end of year meetings and one of those “oh so much fun” Christmas parties for our team. I am surprised my employer is paying as I understand that most departments were given zero budget. I am on a train rather than the usual Easyjet flight as I stayed in London last night – more about that in a moment – and it was easier to use rail.

Last night Pete, myself and 20,000 others saw Coldplay at the O2 arena in London. The performance was excellent and they played all of the hits, but there were 3 negatives I just have to share with you (because I just want to rant a bit):

1. The show started too late at 9.20. Not because I need to be in bed, but because I knew that the last tube is around midnight. So when they stopped playing at gone 11, it took over 20 minutes to get out of the building and only then could we join the queue of many thousands wanting to get on a train.

2. The only screen was half way down the arena hanging from the ceiling and as we were sitting up high about a third of the way back, we had no screen and could see little people on the stage.

3. Their front man, Chris Martin, is a great singer and musician, but he is extremely annoying in that he skips everywhere. He can’t walk or run – he has to skip. He also skips very fast to the edge of the stage then pretends to hit a wall or an explosion forces him back. He only did this about 50 times.

Anyway, even with these little moans it was a good show and I have learned that their bass player 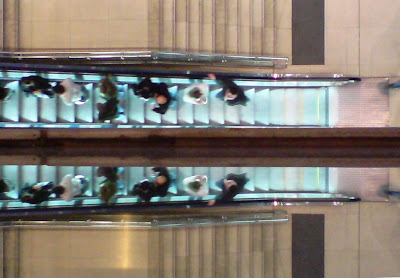 Guy Berryman is very cute. I took this slightly blurred picture on my mobile at the O2 looking down on an escalator reflected in the glass.

And to end with, here are some things I have learned this week…

- In the UK, only 45% of children under 16 have been to an art gallery. That is a crime.
- The computer mouse is 40 years old.
- The team of President elect Obama has employed 8,000 people to run the White House.
- 130,000 false breasts destined to be given away in an Australian Mens magazine have been stolen.
- That actress, Eva Longoria Parker from Desperate Housewives seems to be trying to appear in every TV advert.