It's been a long exhausting day (again), this time travelling around Los Angeles. We started the day with breakfast at the hotel next to a film unit right next to us. It looked like a comedy programme to me.
We took the metro to Downtown L.A. and had a look around the area that went from interesting to worrying. There were dozens of homeless people along Broadway and it didn't feel safe at all. To be honest, Downtown was a dump!
We got a bus to Santa Monica which took over an hour, despite clear roads. It shows how big the city is. By the way, we saw a massive advert for Dr Who along the road to Santa Monica. We walked from the pier along to Venice beach. It's been a really hot day and it was great to see Venice beach which is pretty cool. Saw another film crew, this time filming a dog barking - I have no idea why. Main Street in Santa Monica is worth a visit too.
Universal Studios had been busy overnight to advertise the King Kong ride that is due to open next month by putting huge footprints across the beach at Santa Monica! 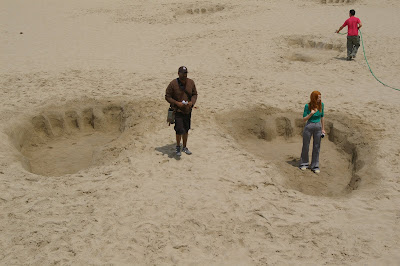 After a spot of lunch and a beer, we got another bus to Beverley Hills and walked up Rodeo Drive. It's just a little exclusive - one shop even had "by appointment only" on the door. 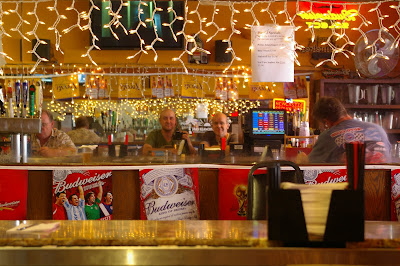 Another bus ride and we got off for a beer in a gay bar on Santa Monica Boulevard. We don't even go to gay bars in London, so this was unusual, but lots of fun.
We ended the day with dinner on Sunset Boulevard.
A few closing comments... the "better" areas of the city are great, but I don't feel safe in general. There are so many people who obviously have mental problems and for the richest country in the world to have so many homeless people is worrying. I thought London was bad, but L.A. is far worse and the begging has been pretty aggressive at times. However, in general the people we've met have been really friendly and helpful, despite thinking we were from Australia! 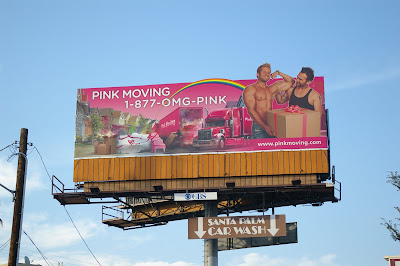