Both Pete and I slept badly, so we decided to leave the hotel in Williams at 7am to get to the Grand Canyon national park.  We left the tree lines roads behind us quite quickly and the landscape became very flat just a few miles out of town.  However, the thick forests returned as we entered the national park around 8am.

There are buses available to take visitors along the south rim of the canyon but we decided to rent bikes as the hills were "gentle inclines".  We soon found that was a slight exaggeration in the literature.  In addition, the altitude of around 7000 feet and thin air made the hills very difficult and the growing heat (it reached around 95 today) didn't help.  As I type this, I was just listening to the weather forecast at 10.20pm and it's still 75 degrees here and 100 degrees somewhere else in the state!


However, it was worth all of the pain.  There are no words that can really describe seeing the Grand Canyon and saying that it's big doesn't come close to the awe of seeing it.  We spent a good few hours just looking and using such description sentences as "wow".  You can just about see the Colorado river a mile below and the rapids.  One strange thing we saw were the Rooks that were climbing high in the sky and then closing their wings and diving into the canyon.  Base jumping for birds!
Tonight we had a steak meal and I stroked a real wolf that is a pet of a guy who walks up and down Main Street in Williams.  We drove up the mountain for a few minutes to see the stars in all their glory without any light interruption where we saw a group of Elks and a Skunk.
Tomorrow we start the final driving leg of 220 miles to the Hoover Dam and then Las Vegas! 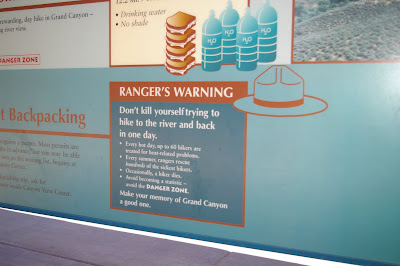 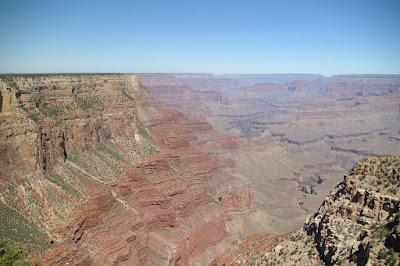 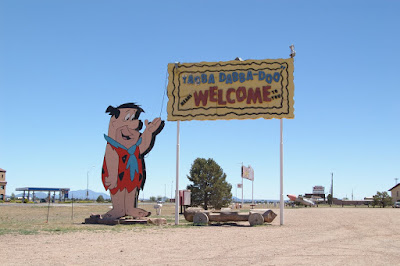