We started the very hot day by driving across some stunningly beautiful valleys with hills and mountains surrounding us. We had a break in a small town called Los Olivos that had lots of winery offices and shops. It wasn't until we looked it up in the guidebook, that we realised that Michael Jackson's Neverland Ranch was just outside of town.
We then went to a vineyard and Pete tasted 7 very expensive wines. On leaving to head cross country toward Santa Barbara, the car lost power up the steep hills and a warning light came on. The car had only 400 miles on the clock! So I nursed it to Santa Barbara airport where there was a Hertz office. The staff there were great and they asked few questions before offering me a Toyota. I really didn't want a Toyota and the assistant noticed that we should have a convertible and so he gave us the only one he had - a gold Mustang! OK, it has some bling, but it makes a fantastic throaty roar when you accelerate.
We eventually made it to the hotel in Los Angeles. Despite being tagged as close to Universal Studios and it being quite nice, it's actually in a really awful looking area. First views of this huge city were not great, but we all know from TV that the city has a lot to offer and not everywhere looks and feels rough.
We have made a quick trip to Hollywood Boulevard, which was not as interesting as I thought it would be. But tomorrow we have a day at the theme park! 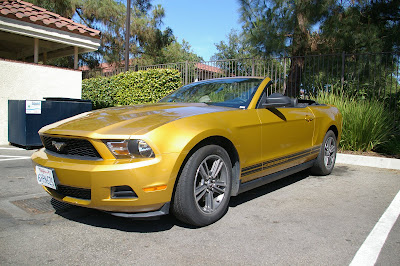 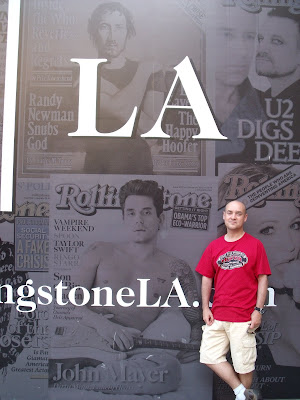