An early blog posting today as we will not be back in the room until well into tomorrow if Pete has his way.

We spent the morning lazing by the pool (and eyeing up the poolboys again) and then went to the newest of the resort hotels which is blandly called City Centre.  It's a collection of massive hotels, casinos and shops aimed at the big spenders.  Every shop that I cant afford to walk into is there already or due to open soon.  Although the site is only half finished, it's looking good.  Just a shame that they didn't give it the inspiring name that it deserves.


I had to come back to the room for a sleep this afternoon.  I think that the heat has finally got to me and I needed a siesta.  That's far better than saying I needed to nap.
Tonight we are going gay.  I've already mentioned in previous blogs that Pete and I hardly ever go out to a gay bar, but tonight we are going to a huge club called Krave that says that's it's a gay club that is "straight friendly" but does feature a porn night with stars attending.  There are few gay bars or clubs in Las Vegas, I assume it's because gay guys are looking for the same things in this camp city as the rest of the pack. We decided to avoid some of the seedier places downtown, though the underwear only club looked interesting. 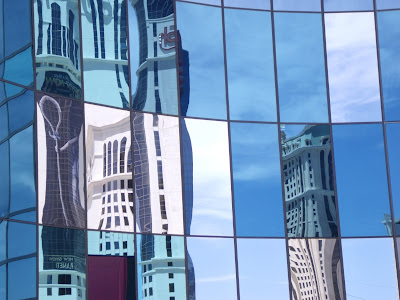