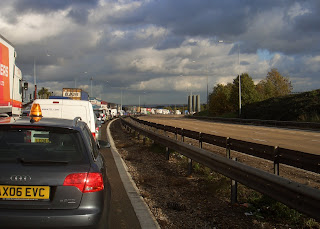 I seem to spend a lot of time on the M25 in my job - during much of that time I appear not to be moving very fast. In fact, during Monday and Tuesday of this week I spent 3 hours on that goddamn road crawling along watching my "instant fuel consumption" readout instantly prove that it's not the most fuel efficient way to travel.
During this weeks fun journeys and the many in recent months, I have noticed that the radio travel reports often omit the M25. The road has to be in a really bad way to warrant a mention.
On one occasion, I wasn't moving for a good 30 minutes - the road was completely gridlocked. Yet, no traffic reports were given. This week it took me an hour and a half to travel the 28 miles on the M25 from the A1M to the M4 junctions. And all they said on the radio was that the M25 was a running a little slow.
So, is there a conspiracy here? Perhaps the longest ring road in the world (and arguably the most important road in the UK) causes the authorities so much embarrassment that they want it's ineffectiveness to be hushed up!
Before you say, "why not take another route?" - well, I do when I can, even with the horrendous delays, it's often quicker than cross country roads. And my final word on this topic - try driving in France and see how much better their roads are.