I am not a cunning linguist. I would love to learn another langauge and will get around to it one day - perhaps in a burst of intensive lessons. I am concerned as to whether I have the right kind of brain for languages, but we shall see.

In my last job I worked for a German company called MLP and over the years, with some people where English was not the first language, obviously mainly German. I worked with Dominic in the same office for a couple of years and he had this talent (I can see his head growing as he reads this) of hearing a word in English, understanding it's use and then remembering it - rarely having to ask about it again. What a git! I doubt I will ever pick language up like that.
My German kolleges would sometimes ask "is that the correct way to say...", knowing that they were usually correct anyway! Some times, I had to think carefully about the best English word or phrase. At those times, you really begin to appreciate how complex language is. For example, using one word or another comes naturally, but when you analyse it closely, you realise there is often no clear reason why XXXX is better than YYYY... it just is the right word! Some crazy English:

The bandage was wound around the wound.
The farm was used to produce produce.
The soldier decided to desert his dessert in the desert.
Since there is no time like the present, he thought it was time to present the present.
How can I intimate this to my most intimate friend? 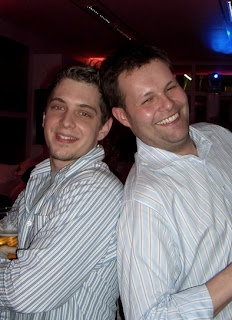 During my time working for a German company, I learnt very little of the language and I regret that. But, I did learn a few stock phrases and my favourite is "Ich verstehe nur bahnhof".

This was taught to me by Lutz (an ex- colleague in Wiesloch) and translates as "I understand only station"... which is meaningless of course. But when you consider a tourist who is listening to a train announcement of locations a train may stop at, all he picks up is "bahnhof" i.e. he can only understand the word "station" of the announcement. In other words, the English version would be "I don’t understand anything" or "it's all Greek to me" or "it's all double dutch".

This blog entry is dedicated to Dominic and Marco (the two smiling guys in the picture) and the lovely Kerstin, who together proved all German stereotypes wrong.