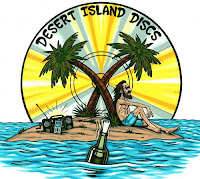 Here is song number six of my Desert Island Discs:
Fais Moi Une Place by Julien Clerc
Pete and I got together in the summer of 1999.  The first evening out (at a work's event), we ended up sitting outside on a terrace at his flat in London all night and watched the sun come up.  Pete has a wide taste in music, from the strange like Yoko Ono, to pure pop like Kylie and from classical to through to Duran Duran. Our tastes do not always match!

I introduced him to the music of Julien Clerc, who I first heard when MTV Europe launched and had a playlist of around 10 songs. Julien is a singer-songwriter who has been around for decades and his albums still debut at the top of the French charts.  I can’t really think of an British or American equivalent singer-songwriter who has lasted so long - perhaps Elton John. He is often classed as a "singer for the ladies", but I think that’s rather unfair. Yes, he does release the odd mushy ballad and occasional cheesy pop tune, but on every album I own, there are a few tracks that any songwriter would be proud of.

Fair Moi Une Place is a sweet song and it's one of Pete's favourites, so this choice is for him.